started a topic about 8 years ago

I'm pretty sure I can't do this using RE export/import, but maybe IOM can!  We had a gift officer leave suddenly and I'd like to move all of her proposals to the new gal.  Does anyone know if IOM can help with this?  Not the end of the world if I have to go into each one, but if I don't HAVE to, that'd be most lovely, of course.

3 CommentsSorted by Oldest First
A

said about 8 years ago

ImportOmatic can add another solicitor onto the proposal, but it won't remove the existing solicitor.

If you would like to use IOM to add your new gift officer, you'll need the constituent's name or ID, the proposal name (and if the constituent has more than one proposal with the same name you'll want to include the purpose as well), and the new solicitor's constituent ID.

Use the Record Type = Proposal to map the proposal information.

Go to Prospect in the left side navigation menu, and choose to match the proposal on either name or name and purpose. 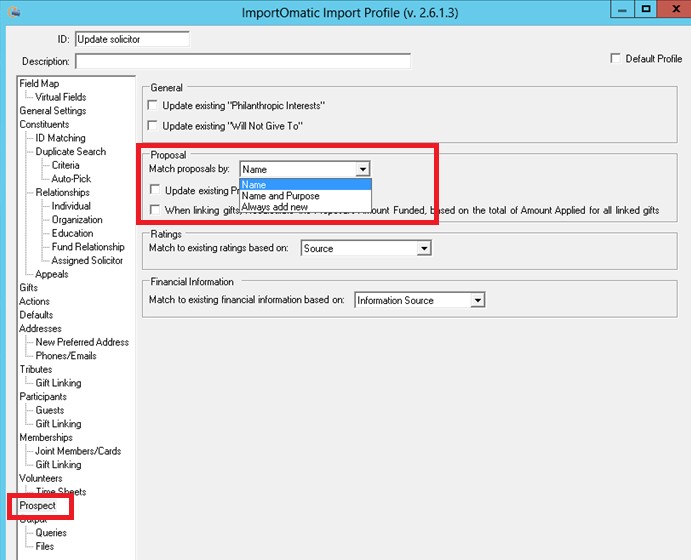 Please let me know if you have any other questions.

said about 8 years ago
You could do this with the RE export/import, but it would be a staggering amount of work. Since you can't overwrite the existing solicitor assignment, you'd have to create an import file of all of the affected proposals, modify that import file outside of RE, then go back into RE and globally delete all of those proposals, and then reimport them using your modified data.

Unless you're dealing with a very large number of proposals, you'll probably save time (and risk) by doing it manually.

I suppose you could do that final import using IOM, as well, but you still would need to have deleted all of the relevant proposals from RE first.
K

said about 8 years ago
I will most likely NEVER do this then. I really appreciate the input, Evan and Amanda. I don't mind doing tedious manual things if if it's the only way. I just hate to find out later there was a less tedious manual way. Thank you both so much.
Login or Signup to post a comment
More topics in ImportOmatic
See all 1185 topics
Help Desk Software by Freshdesk Support Desk